Since 1980 the sponsorship programme "New Positions" provides galleries with the possibility to present a solo presentation of a young artist in a 25 square metre area adjacent to their main stands.

Financial support is provided by the Federal Government Commissioner for Culture and the Media, the federal state of North Rhine-Westphalia, the Bundesverband Deutscher Galerien und Kunsthändler (German association of galleries and art dealers) and Koelnmesse. Every year a new Jury of experts in the visual arts is assembled to make the selection.

This year‘s Jury of experts consist of Dr. Renate Goldmann, Director of the Leopold-Hoesch-Museum in Düren and of the Papiermuseum Düren, Nikolai Forstbauer, author and journalist, Stuttgarter Nachrichten, Martin Liebscher, Artist and Professor at the University of Art and Design in Offenbach, Thomas Rehbein, owner Galerie Thomas Rehbein, Cologne, and Klaus Webelholz, Director Galerie Bärbel Grässlin, Frankfurt. They have selected 21 young artistic positions. The Deutsche Telekom will also confer the ART COLOGNE Award for New Positions. The award also includes a solo exhibition in the Cologne Artothek. 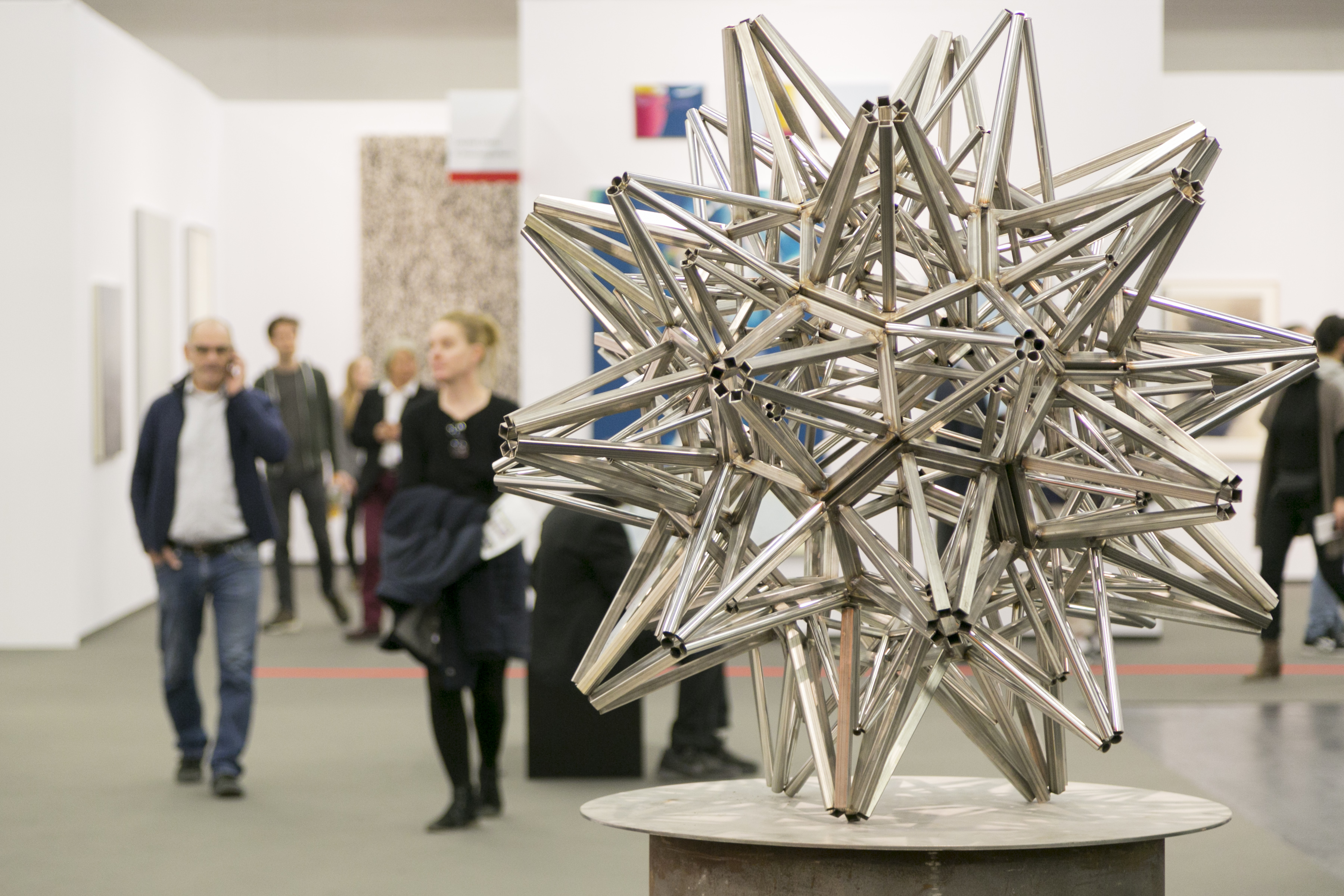 Many of the young artists selected this year move between genre boundaries, lending the classic media of Painting and Drawing new and innovative impulses, through unconventional techniques, new materials or process oriented pictorial inventions.

Mathieu Bonardet (Galerie Jean Brolly, Paris) creates a delicate play of lines with the finest shading using graphite on paper, which are sometimes mounted on wood. The gentle colour progressions, even of small formats, radiate well beyond the edge of the image field and appear to merge with the surrounding wall elements. The movements of the body are inscribed into the drawings, which Mathieu Bonardet also presents as diptychs. When viewing them, the energy at play during the creation of the work cam be sensed.

Wood, metal, hardboard, fabrics and carpets serve the painter Lutz Braun (Galerie Nagel/Draxler, Cologne) as painting surfaces, on which he creates apocalyptic scenarios full of allegorical references, in which colour serves as an important mediator of mood. A narrative, theatrical impression is typical of Braun's paintings, in which motifs of the present, the past and the future interlock.

Sebastian Dannenberg (Galerie Anke Schmidt, Cologne) interacts with the special characteristics and features of the respective (public or semi-public) space with painterly gestures. His works reveal their special impact and make new experiences of space accessible to visitors in an interplay of painterly and decorative elements. Dannenberg often works directly on the exhibition space wall, using commercially available paint, which he then applies as areas or stripes in the process. His location-oriented works are temporarily limited markings, with which he produces references between the place, the viewer and the artistic positing.

A serial work method is typical of Theresa Eipeldauer (Galerie Krobath, Vienna), who plays out a motif, a pattern or a hatching in various techniques and on a variety of pictorial media, including foil, paper, cardboard. The basic element is the line, which is constantly multiplied and forms clear architectural-geometric forms. The silkscreen prints, predominantly in pastel-like colours, mounted on brackets and frames, are as much objects in the space as printed sheets of paper rolled up, which are positioned vertically or horizontally.

Ayan Farah (Kadel Willborn, Düsseldorf) unites aspects of Western abstract art and Land Art with techniques of African arts and crafts. The foundation of her pictorial works is provided by historical textiles, which she treats in an alchemistic process with minerals and types of earth collected in her travels. The fabrics are then cut and composed anew into strict geometric patterns and linear compositions. Farah conceives of her work as the poetic equation of a complex sociopolitical reality full of varying world views.

Tim Freiwald (Walter Storms Galerie, Munich) saws or cuts the image surface, dissolves it or treats it with fire, and then stabilizes it again by various means. Images are generated in a sequence of action and reaction, with the signs of their origin quite legible. By breaking open the canvas and bringing together various materials, Freiwald's works assume the character of objects.

Martin Groß (Galerie Eigen + Art, Berlin/Leipzig) includes impressions from urban space in his sometimes wall-filling pencil drawings and prints. The diffuse images, which are as reminiscent of postindustrial landscapes as they are of visionary planned cities, change back and forth between abstraction and representation. Speed and visual overstimulation are also perceptible in the condensed representation.

Julius Hofmann (Galerie Kleindienst, Leipzig) establishes a dialogue between painting and animation films in his oeuvre. He imports painterly structures and surfaces into the films, which lends the medium a surprising liveliness. The familiar perfection of the films is undermined by Hofmann, in that he allows for errors that the computer program would normally correct. This process results in an individual visual signature. Hofmann's paintings appear in turn like compressed films, in which cryptic stories are told that take place in eery locations.

Igor Jesus (Galeria Filomena Soares, Lisbon) works with strategies for the reappropriation of (found) objects and their transfer into a new artistic context in his multi-faceted works. In the process he utilises his objects, films and installations to address cultural and societal differences.

The Cypriot Lito Kattou (Eleni Koroneou Gallery, Athens) circles around questions of time and space in narrative sculptures, installations and performances with the most varied materials, such as aluminium, steel, textiles and plastic. In the process, the artist, who for the most part works in series, frequently positions relics, often making a combative impression, flat on the ground or on the wall.

Set pieces from traditional painting genres, such as still life and landscape painting provide Pierre Knop (Setareh Gallery, Düssseldorf) with the framework for bizarre, ironic scenes, which are preferably staged in exotic venues. Through the use of a variety of materials, such as oil paints, oil chalk and pencil crayons, and with a striking, initially naive seeming painting method, Knop creates a sense of insiodyncratic visual immediacy. Only upon closer observation is the interest of the artist in social structures, hierarchies and role models revealed.

Ruth May (Galerie Barbara Gross, Munich) examines the theme of materiality in drawings, collages, textile images and objects. She is especially interested in the representation of clothing. Robes and armour and their spatial staging in the two-dimensional image. She acquires her motif models from a variety of contexts, times and cultures. The visual citations, which originate from the paintings of the Old Masters, as well as from the comic and tattoo scenes, are processed and recombined many times until people, animals, devices, masks and ornaments join to form highly colourful and dynamic communal embodiments.

Renaud Regnery (Klemm's, Berlin) develops architectural settings for his pictorial works coordinated with the respective spatial environment. His work method moves between closed image cycles and quasi serially developed groups of works that are realised either in a purely painterly fashion or using a variety of printing techniques and painting materials.

The images of Sophie Reinhold (Galerie Rüdiger Schöttle, Munich), which deal with the relationship of pictorial space and colour, pictorial object and space, develop in a long process. She preferably uses marble powder, as well as stone and metal powders as primers. While working, the surface is polished repeatedly, resulting in smooth surfaces, beneath which the motifs shimmer through mysteriously. Paint streaks overlay beam structures and other shapes, which ascend weightlessly from the ground.

With sculpture, video, photography, sound and light, as well as music and dance productions, Alona Rodeh (Galerie Christine König, Vienna) has a broad spectrum of artistic forms of expression at her disposal, which occasionally flow into multimedia installations. These develop increasingly into theatrical events through the enhanced use of light and sound. Objects, situations and spaces are placed in a sophisticated relationship with one another in the context of an examination of societal phenomena.

Berit Schneidereit (Cosar HMT, Düsseldorf) links photographic techniques like the photogram and analogue and digital image generation in black and white and in colour at eye level with one another in her oeuvre. Her images suggest a movement through photographic spaces. Especially her large format photograms allow the viewer apparent access into the image and inclusion in the image narrative. Fences, nets and mesh structures lie like membranes on top of the image space. Her works evoke a spatial experience that stimulates reflection on reality and its reordering.

Martin Spengler (Galerie Thomas Modern, Munich) creates large-format, highly complex image reliefs of corrugated cardboard blocks that often project far into the space, the motifs for which he finds on the street, in the Internet and in newspapers. Spengler carves his architectures, urban landscapes and crowds of people into the material in a time-consuming process and with a precise technique, thereby combining painting and sculptural ideas.

Rebecca Ann Tess (Philipp von Rosen Galerie, Cologne) dedicates herself in video and photography works to architectures she sees as symbols for prosperity, power and influence. With modern high-rises in metropolises like New York, Dubai, Hong Kong, Shanghai and Seoul, as with the medieval San Gimignano, she emphasises the relationship between social position and the spatial height of representative structures on the basis of unusual camera angles. In the "Template Selection" photo series, which shows detailed images of structures in major international cities, she reduces the modern urban architecture to abstract interactions of form, colour and light.

In the complex, intensely colourful mixed techniques of Kristian Touborg (Galerie Mikael Andersen, Copenhagen), citations from art history mix with his own pictorial inventions to form puzzling, predominantly figurative paintings that take their special charm from the haptic of the canvases. These are sewn together from individual elements originating from the most varied contexts. Digital image generation and classic painting, abstract and representational elements merge to form an individual pictorial language with a high degree of recognition value.

Noa Yekutieli (Knust & Kunz, Munich) is a master in the rare art of the papercut, which is used in large and medium-sized formats, as well as for extensive installations, and occasionally in connection with collage and photography. The deconstruction and reconstruction of pictorial ideas thereby play just as important a role as nature, architecture and personal memories.

Last year’s recipient Paul Spengemann, will open his exhibition at the Cologne Artothek in the evening on Friday, April 20th during ART COLOGNE 2018.